Macroeconomic data continues to point to a softening economy… The June Consumer Confidence Index fell to its lowest level since February 2021. On June 29th, the U.S. Bureau of Economic Analysis revised its estimate of 1Q2022 real GDP quarterly annualized growth lower to -1.6% versus its last estimate of -1.5%, driven primarily by a decrease in personal consumption. U.S. Initial Jobless Claims continued to trend higher. The S&P 500 Index closed at -16.45% return for 2Q22, the worst since the 1970s and the third worst quarter since the 2008 recession (-22.56% in 4Q2008, followed by -20.00% in 1Q2020 recession periods). During the first half of 2022, the S&P 500 had its worst half-year since 1970, the Dow had its largest first-half drop since 1962, and, at roughly 30%, the Nasdaq experienced a historical drop -- the major indices are all indicating that the equity market has already priced in a recession!

The Bureau of Labor Statistics’ June employment report released on Friday highlighted the strength of the U.S. labor market and further supported a 75-bps rate hike later in July. We will continue to monitor macro statistics as they point to an impending recession.

This week in Cryptoland...

On July 11, 20-day rolling correlation between BTC and TQQQ rallied back to 0.60 versus 0.33 on June 13 (Exhibit 2). The correlation collapse from mid-May to late-June reflected idiosyncratic risk in cryptoland during asset-specific deleveraging and risk-repricing. However, as crypto becomes more highly correlated to the overall markets again, it will be subject to shocks in macro variables. Recessionary fear will likely dominate the crypto market as it has in the technology space.

In June, we commented “A strong dollar puts the economy under pressure, which equates to a global liquidity squeeze.” Greenbacks broke out 105 resistance last week and stayed elevated at 108 (Exhibit 3). The aforementioned recent idiosyncratic risk in cryptoland lifted BTC and DXY 20-day rolling correlation to positive. We expect correlation to return to normality, i.e. negative, over the next few trading sessions. 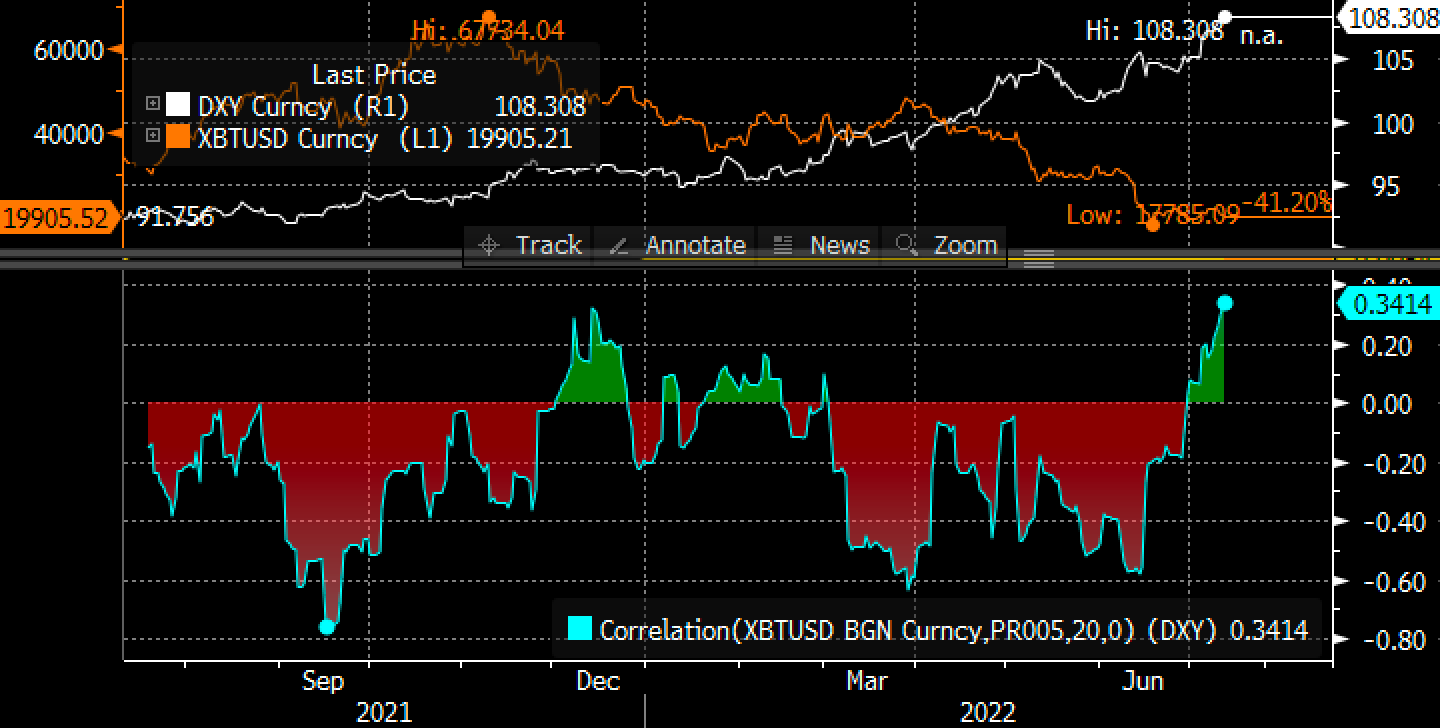 Speaking technically… The 100-day moving average (100MA) continues to ride on top of the 50-day moving average (50MA) since crossing over on May 15. Today, momentum oscillators put BTC in the overbought territory, while price momentum indicators stay neutral, pointing to the potential breakout to breach the current support of 19,000. The bearish setups and macro factors linked through an increasing correlation between the crypto and equity markets lead us to reiterate our theory of a full-cycle retracement. Furthermore, Mt. Gox creditors are expected to release approximately 140,000 BTC in August, putting greater price pressure from the supply side. The next support level to watch for BTC is 16,000.

In 2017, Sergey Nazarov and Steve Ellis created Chainlink, allowing smart contracts access to reliable and real-world data, not relying on external data to execute their agreements. Chainlink provides the ability to transfer data on and off the blockchain in a secure and decentralized manner, with access to all the major blockchains, including Ethereum, Solana, and Avalanche. It also combines and interacts with other off-chain services such as payment gateways, execution of contracts, and other actionable services on any API.

Chainlink aspires to become a standard solution for such use cases as financial data, financial agreements, insurance, and NFT, to name a few. The protocol allows for external data such as sports games and stock prices to be entered into the blockchain through smart contracts.

LINK is the native token used to reward network operators for retrieving data from off-chain feeds, formatting data into accessible formats, and performing off-chain computations. In 2021, Chainlink was able to secure a value of 75 billion as the platform supports more than 1,000 projects. LINK has a max supply of one billion coins, of which 467 million have been distributed. LINK sits at a price of $6.41 today with a market cap of just under 3 billion. It is down 67% since the start of this year.

Tracking the weekly movement of the major cryptocurrencies. 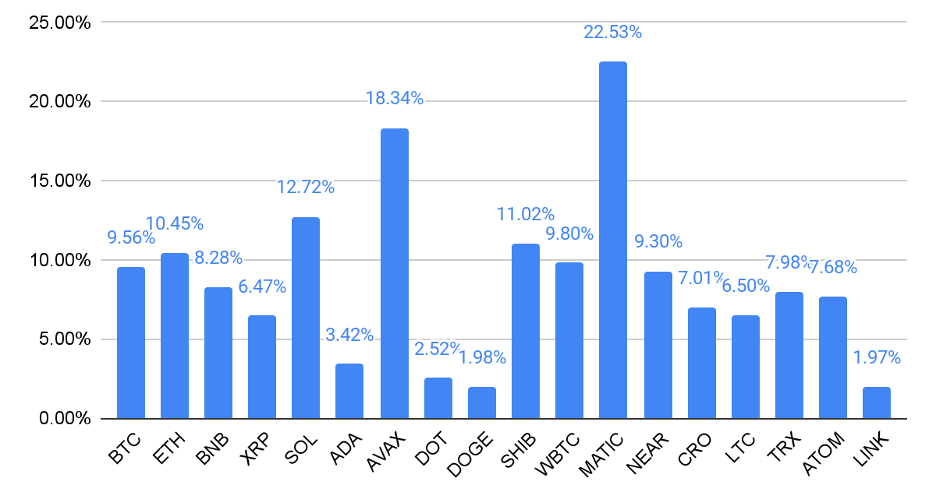 Securitize Capital in the news:

Regulations in the news:

Instagram
© 2022 Securitize Capital
All rights reserved
info.securitizecapital@securitize.io
The information contained herein is for informational purposes only. It is not a solicitation nor an offer to purchase or sell any securities. Securities will only be offered through confidential offering materials delivered to suitable, accredited investors. Private security transactions involve a high degree of risk and are not suitable for all investors. Securitize Capital is a subsidiary of digital asset securities leader Securitize, Inc. Securitize Capital’s investment offerings are available through Securitize Markets, LLC, an SEC-registered broker-dealer, member of FINRA and SIPC, and operator of the company’s alternative trading system. Securities offered on the Securitize Markets ATS have not been registered under the Securities Act of 1933 and may not be offered or sold in the United States absent registration or an applicable exemption from registration requirements. By accessing this site and any pages thereof, you agree to be bound by our Terms of Service and Privacy Policy.