July proved to be a great month for risky assets

For risky assets, July was one of the best months over the last decade as SPX gained 9.11%, NASDAQ gained 12.55%, and VIX dropped by 25.71%, with much of the upside due to the last week of the month. On Wednesday, as the market expected, the FOMC increased the target range for the federal funds rate by 75 bps, to 2.25%-2.50%. Risk sentiment was buoyant during and after Fed Chair Powell's press conference. The twist flattening in the US treasury curve quickly reversed as front-end rates rallied; the UST curve twist-steepened with 2s30s rising back into positive territory as 30y US rates sold off (Exhibit 1).

Real GDP further contracted by 0.9% in Q2 following a Q1 slowdown, marking a technical recession as mentioned in last week's commentary. The National Bureau of Economic Research characterizes recession as a broad, deep, and prolonged economic downturn leading to contractions in personal incomes and employment. Yet income and jobs have remained firm in 1H2022 and we caution against putting too much weight on the H1 decline in headline GDP.

With the Fed's dovish tone and poor GDP print, the market eased into the "bad news is good news" mantra. Traders speculated that the Fed would be more likely to taper the pace of its rate hikes due to quicker than expected slowdown in growth data.

Major economic releases of the week include: ISM Manufacturing and Services release on Monday and Wednesday, respectively; Jobless Claims and Employment Situation on Thursday and Friday, respectively.

This week in Cryptoland...

While this was a relatively strong week for most assets, concerns over strength in the short term remain. Bitcoin dropped to lows just below $21,000 on Tuesday before a significant rally post-FOMC. In line with recent inflation and rates prediction trends, it was a case of selling the rumor and buying the news, with assets moving up rapidly afterwards and BTC recording a new local high at $24,600. ETH extended its outperformance both in absolute terms (just below $1,800) and on the ETH/BTC cross (just below 0.074). Exhibit 2 shows 20-day moving average (MA) cross over to 50-day MA on July 26 with strong momentum, reflecting ongoing implementation of ether "merge trade" discussed in last week's commentary.

Learn more about how to take advantage of ETH's upward trend. Add exposure to ETH and potential income to your portfolio with our ETH Yield Fund, seeking to generate higher yields than traditional US Dollar credit markets.

In the broader market, Ether Classic (ETC) continues to outperform as sections of the crypto and mining community in East Asia look to move over hashpower and support the retention of a proof-of-work ETH chain. ETC hashrate increased by 43% from July 15 to Aug 1 (Exhibit 3) and we expect that the network hashrate will continue to expand. Filecoin (FIL) has also made gains drafting off the heightened interest in the region in non-proof-of-stake chains. 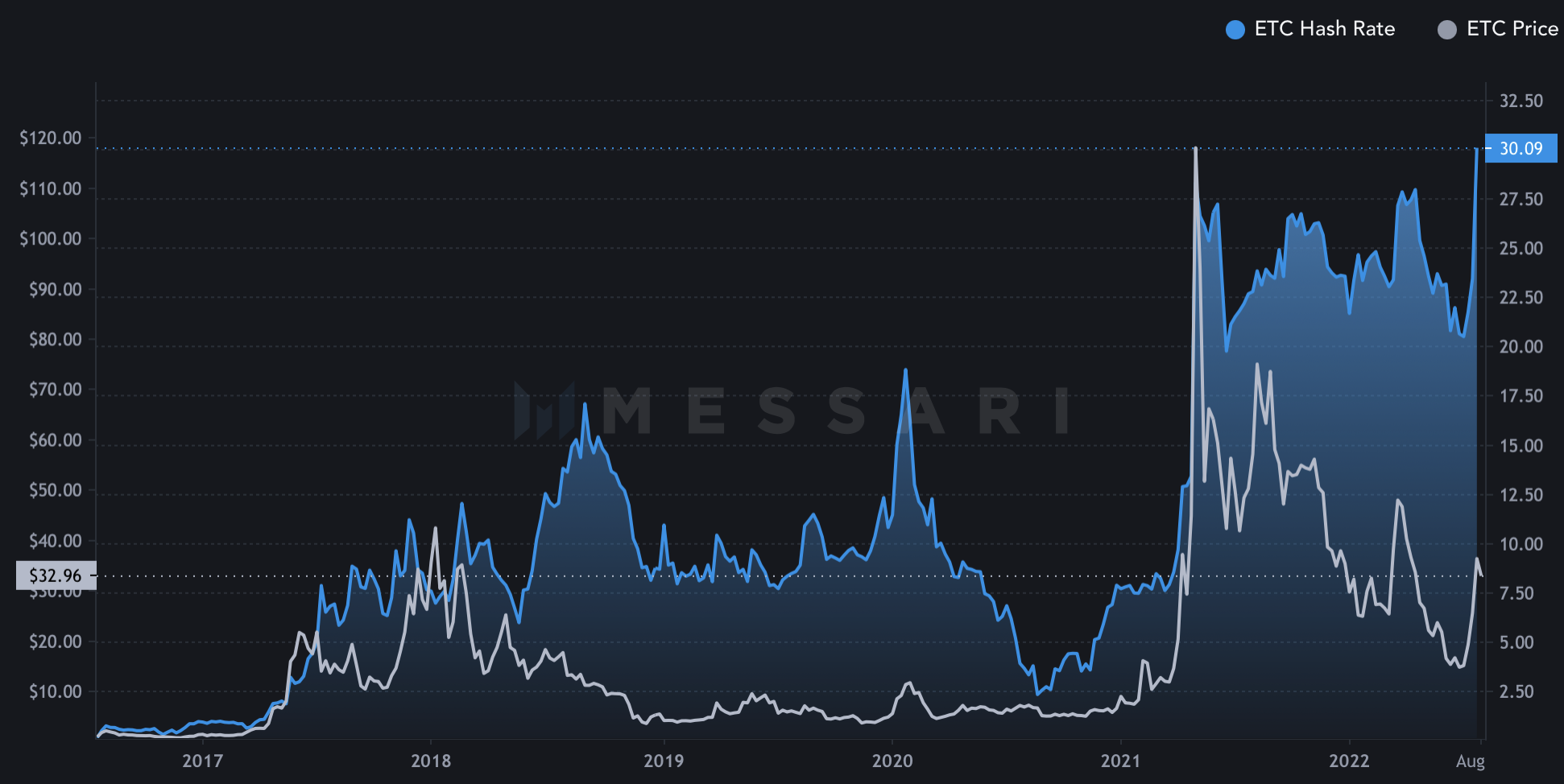 Momentum has been poor outside of the FOMC reaction, and at the least, a retracement of recent gains seems likely given the current macro climate. However, this retracement should present an opportunity over the mid term to build up ETH positions: while at the mercy of macro, ETH's fundamentals coming into the merge remain strong and there will be opportunities if one can appropriately navigate the macro gales.

As Meta (formerly Facebook) continues to struggle with significant research and development costs on its metaverse play, the success story of the next cycle may be in a sector that it cut loose. Aptos Labs, comprised of ex-Meta employees and openly billing itself as a resurrection of Meta's shelved Diem stablecoin project, raised $150 million last week in a round co-led by FTX Ventures and Jump Crypto, which is in fact its second major round raised this year after a $200 million round four months ago.

A $2+ billion valuation on a blockchain developer tends to only mean one thing -- a new layer-1 blockchain -- and that's what's going on here. Aptos is currently only available in testnet form, but it is nonetheless available, and the secret sauce here is the programming language that it's built on: Move, a derivative of Rust, initially built for Diem. The idea is that, like Rust-based Solana (SOL), Aptos will open crypto to new use cases through more flexible coding primitives, lower latency, and throughput scaling.

Aptos's timetable right now is loosely defined, but as mentioned, the testnet is already live and, with its backers, there is likely to be no shortage of support for development. In a similar manner to previous L1s like EOS, AVAX, DOT, and SOL itself, it has quickly become a subject of significant anticipation among industry insiders.

The question to be asked currently is whether it comes to praise Caesar (Solana), or to bury it. On the one hand, Solana's backers and Aptos's backers are largely the same. According to Kyle Samani, cofounder of Multicoin Capital (to thedefiant.io): "Solana and Aptos are the correct architecture for scaling Layer 1s (maximizing throughput of base layer), and so accordingly we made large investments in both."

On the other hand, as the pool of blockchain Rust developers is already small, a Move-based chain is likely to eat into that pool, and some prominent Solana developers have publicly started to transition over. In any case, the progress of Aptos is likely to be one of the most important stories in crypto over the next two years or so. Similarly, Solana's series A came just a few months before the market bottom in late 2019/early 2020, and its token launch immediately following.

Tracking the weekly movement of the major cryptocurrencies. 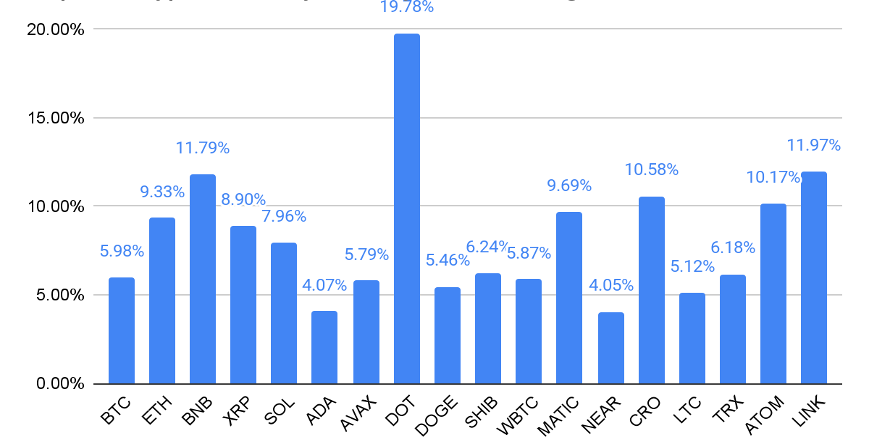 Instagram
© 2022 Securitize Capital
All rights reserved
info.securitizecapital@securitize.io
The information contained herein is for informational purposes only. It is not a solicitation nor an offer to purchase or sell any securities. Securities will only be offered through confidential offering materials delivered to suitable, accredited investors. Private security transactions involve a high degree of risk and are not suitable for all investors. Securitize Capital is a subsidiary of digital asset securities leader Securitize, Inc. Securitize Capital’s investment offerings are available through Securitize Markets, LLC, an SEC-registered broker-dealer, member of FINRA and SIPC, and operator of the company’s alternative trading system. Securities offered on the Securitize Markets ATS have not been registered under the Securities Act of 1933 and may not be offered or sold in the United States absent registration or an applicable exemption from registration requirements. By accessing this site and any pages thereof, you agree to be bound by our Terms of Service and Privacy Policy.